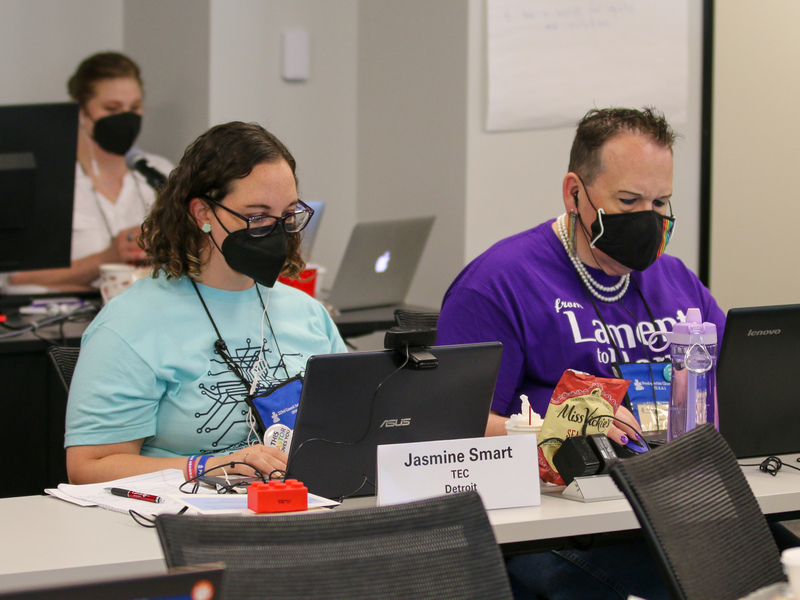 Jasmine Smart of the Presbytery of Detroit and Lance Wiseman at the Polity Committee meeting at the 225th General Assembly on June 20, 2022, at the Presbyterian Center in Louisville, Kentucky. (Photo by Randy Hobson)

Jasmine Smart of the Presbytery of Detroit and Lance Wiseman at the Polity Committee meeting at the 225th General Assembly on June 20, 2022, at the Presbyterian Center in Louisville, Kentucky. (Photo by Randy Hobson)

On the final day of its pre-plenary work, the Polity Committee approved two actions for the full Assembly to consider.

The first seeks changes to the Book of Order that include language instructing adoption and implementation of policies concerning sexual harassment, child and youth protection and antiracism.

The second action makes it easier to receive immigrant pastors as members of presbyteries.

Read the full summary of the committee’s actions here.

The action covering antiracism, youth protection and sexual harassment policies brought together two items of business on the committee’s opening agenda: “POL-10: On Amending G-3.0106 to Add an Antiracism Policy with Suggested Training for All Members of Each Council” and “POL-17: On Adopting and Implementing Harassment Policies for All Councils.” Both items relate to the same part of the Book of Order (G-3.0106). Sponsoring POL-17 was Philadelphia Presbytery. Sheppards and Lapsley Presbytery sponsored POL-10.

After the committee heard from resource staff and overture advocates, there was commissioner support for combining the two items of business into a substitute motion.

The committee broke into “crystallization” small groups, as they had to good effect on day 2, and heard more from overture advocates, including the Rev. Denise Anderson speaking on behalf of the Racial Equity Advocacy Committee (REAC). REAC had written in its overture response that “Noticeably absent is the language related to addressing systemic and structural racism,” and suggested adding language to that effect.

Despite one commissioner’s speaking out against combining the two business items, saying the committee could be creating “a forest fire,” support for combining the items continued to grow.

Another approach from the day before was reprised by the commissioners: adding comments to motions to help advise the Assembly in a non-binding way.

After voting to include one such comment recommending a 1998 denominational standard of ethics “to councils of the church in their development and adoption of these policies,” (earlier amendments had removed a proposed phrase about cultural and systemic racism), Maureen Wright, Committee Parliamentarian, gave what she called a “remedial reminder” of where the group found itself in the procedural process road map.

Moderator Sarah Thornburg declared the substitute motion “perfect” and the committee voted to replace the main motion with it, with 24 votes for and 4 against.

Wright pointed out a “cleaner” way to get the substance of the combined items of business to the full Assembly: sending the approved POL-10 (containing language from POL: 17) on with one vote and with another telling the Assembly that POL-17 had been handled by POL-10.

That’s what the committee did, with the initial vote 25 for and 3 against, and the second 25 to 1.

From there the committee turned to its last scheduled item of business, with Thornburg thanking all for their patience and urging renewed attention.

“POL-15: A Resolution on Receiving Immigrant Pastors as Members of the Presbytery—From the Racial Equity Advocacy Committee” began with Carmen Rosario of REAC, which had brought the resolution, speaking in support. She referenced changes that had been advised by the Advisory Committee on the Constitution (ACC) and requested they be incorporated whole-cloth into the resolution. Anna Kendig Flores, speaking for the General Assembly Committee on Representation, said GACOR also supported the resolution as changed.

With the ACC’s language advice added, the resolution continued to acknowledge the difficulties faced by many immigrant pastors early in their pastorate trying to satisfy the denomination’s standard ordination exams. The resolution also included changes to the Book of Order that instruct presbyteries to use other approaches they deem appropriate “to provide such educational and mentorship opportunities as seem necessary and prudent for that minister’s successful ministry in the presbytery.”

Again the committee broke into small groups to discuss POL-15. The difference between “may” and “should” (words found in the resolution) was parsed, with a consensus view that “may” was less binding, and in this matter wholly appropriate.

Voting to amend the main motion inserting the ACC language changes passed with 25 yes votes. Then the committee voted to approve the amended motion with 28 yes votes. There was an identical result on a procedural vote to send the approved motion to the Assembly.

With a final unanimous vote to receive the report of the General Assembly Permanent Judicial Commission, the committee’s business concluded. The commissioners and advisory delegates, the moderator and vice moderator, the resource staff — all made a joyful noise, joining their politely Presbyterian ruckus to the committees who had finished earlier in the day. 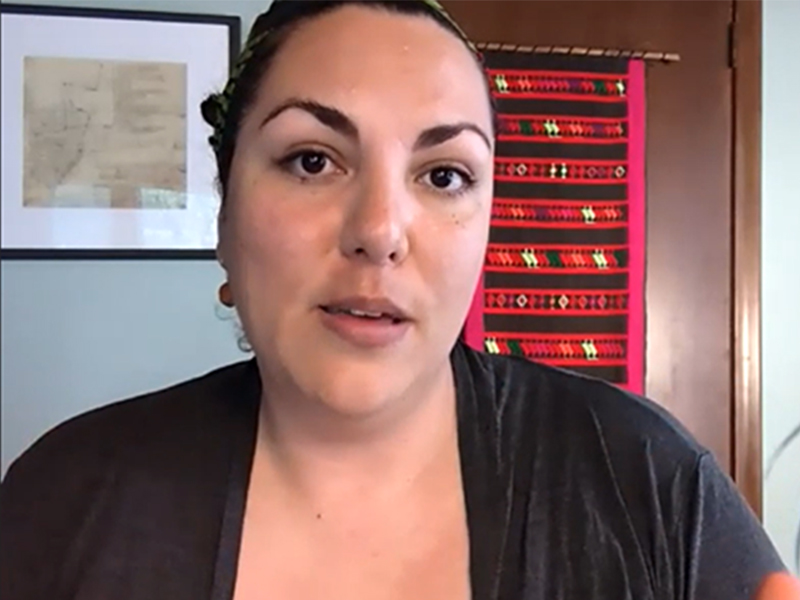 Over three days the Polity Committee had found tactics that worked well for its members, including small groups that helped crystallize ideas about the substance of proposals before leadership walked the body through the procedural steps of amendments and motions.

Thornburg told the GA News that another person from the committee had come up with the idea to use the crystallization sessions, which were first tried when Vice Moderator Cheryl Hartman was behind the leadership microphone on the afternoon of day 2. From that point forward, every item saw the committee break into small group discussions.

As for a commissioner’s perspective, Denise Pass from Plains and Peaks told the GA news that issues she had shared on day 1 with using hearing aids together with headphones continued into day 3. She liked being able to follow along with the motions inside PC-Biz. She recommended other commissioners use a laptop for their committee work inside the Center, a full keyboard and mouse making it quicker to submit proposed amendments.

“It was great to have PC-Biz available,” she said. Being “even more intentional, deliberate, and slow” would help with frustrations some commissioners had felt earlier in the process, including participants accessing interpretation in Spanish or Korean.

Getting more feedback from commissioners like Pass will help the Assembly with future meetings — not only because of the increasing number of digital tools and resources being used, but the perennial struggle commissioners and advisory delegates face working through procedural steps decently and in order.