Topping the agenda of day two: Retiring pastors, partnering with other denominations and pastoral roles for ruling elders 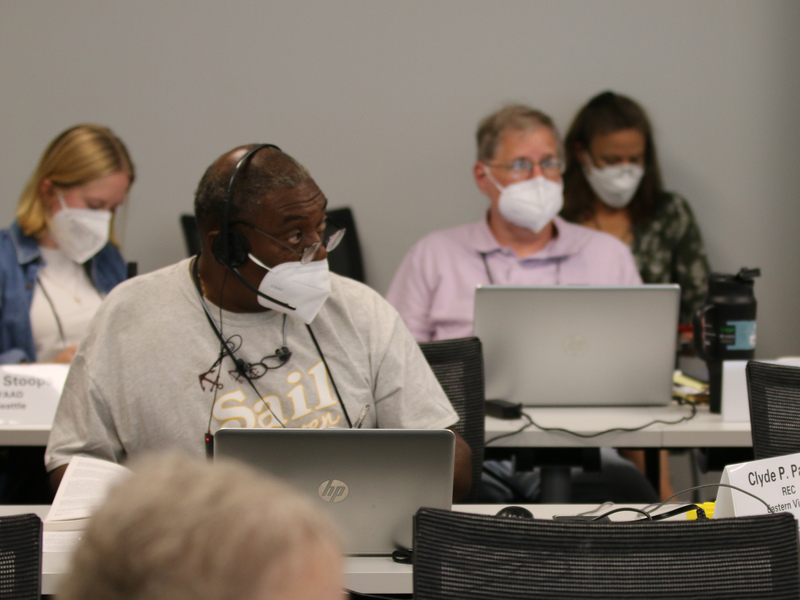 Sticking with its first-day precedent, the Polity Committee voted to approve a single item of business, disapproving the others on its agenda. Two disapproved items added comments — one urging partnership with historically Black congregations, the other recommending work by the Mid Councils Committee.

In not calling for sweeping changes for the church constitution, the committee still talked through compromise possibilities dealing with issues of white privilege and pastoral classification. The added comments show disquiet with the status quo, but an unwillingness to make wholesale polity changes.

The Polity Committee quickly dispatched its first item of business, disapproving an overture from the Presbytery of Mid-Kentucky in the morning: “POL-12: On Amending G-2.0504 Regarding Parish Associates.” The item sought to restore the office of parish associate to the Book of Order.

With Sarah Thornburg moderating and Cheryl Hartman serving as vice moderator, the committee heard from overture sponsor Mid-Kentucky Presbytery, with Stated Clerk Jerry Van Marter speaking in favor of the item, and the Advisory Committee on the Constitution (ACC) advising disapproval. One of the ACC’s main concerns was how the proposed change could preclude “pastors, sessions and congregations that are looking at other creative ways to involve the ministry of specialized or retired pastors … from doing so.” The item was disapproved 28–3.

The committee then turned to “POL-07: On Amending G-2.0503 to Change the Designation Honorably Retired to Retired,” with its rationale spelling out one of the biggest reasons for the changed language accordingly: “Presbyteries sometimes face situations in which a minister’s service has been marked by difficulties and challenges that do not rise to the level of formal disciplinary charges and censure, but which are hardly worthy of the label ‘Honorable.’”

ACC advice “raised issues” about the overture that was sponsored by Miami Valley Presbytery, including possible unintended consequence of the proposed language change. The ACC’s written advice indicated “that if the 225th General Assembly believes that the intent of this overture is appropriate, the additional words ‘or other factors satisfactory to the presbytery’ be stricken.”

The motion process changed the original item, so that in addition to the word “honorably” being removed, a list of descriptors regarding reasons for retirement were crossed out.

There was another amending motion, which a commissioner praised for creating conditions allowing a congregation “to do as much or as little” as it wants when a pastor retires.

A vote was taken to amend the language, which passed. After some controlled woots of celebration, and maybe for the looming lunch, the committee broke and then returned to finalize its work on the item.

In a vote of 28 yes and 2 no, the amended motion passed. For procedural reasons the committee needed to vote on the same language to send the motion to the Assembly, which it did. One and a half days in, and the committee had a second item for the full Assembly to debate.

Hartman took the leader microphone and led the committee through the mid-afternoon break.

Next up was “POL-13: On Amending G-2.0505b. Regarding Ministers Surrendering Membership with Other Christian Churches.” Speaking to the motion was the Rev. Marcia Mount Shoop, from the overture sponsor the Presbytery of Western North Carolina.

Shoop said there is a conflict between the current wording in the Book of Order and the values of the church, regarding the church’s relationship to Christians with connection with other denominations. That includes the barring of dual ordination across denominations.

“I’m asking you to expand your imagination, especially when considering the advice of ACC,” Shoop said, adding that the ACC’s advice disapproving the overture — already spelled out in its comment — tends more to “gatekeeping” mentalities than to “Spirit-led transformation.” Shoop said that the problems ACC anticipates coming about if the proposed change is made to the Book of Order can and should be dealt with by presbyteries.

Dr. Charles Heyward of the National Black Presbyterian Caucus also spoke in support of the item by video, in the process recommending added language that would require covenanting with a PC(USA) church and presbytery by any pastor entering into a partnership with a PC(USA) council. 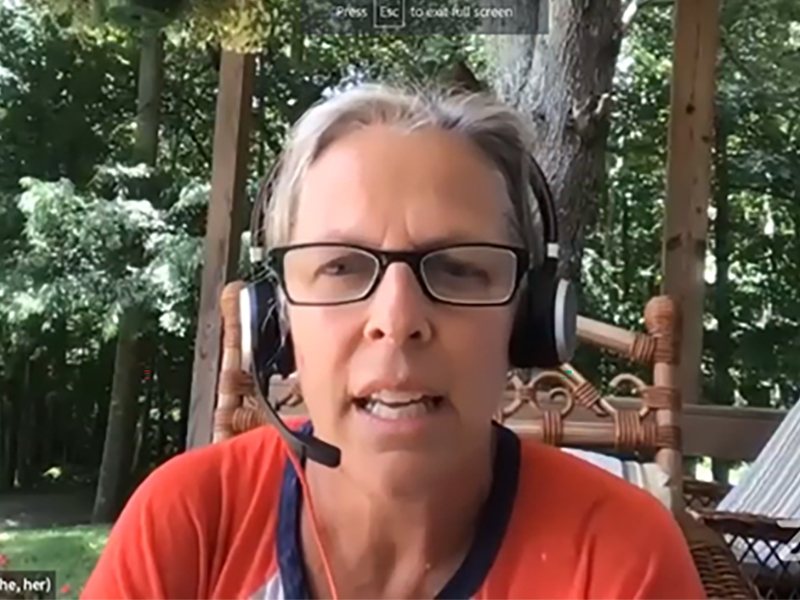 The language change “is just too broad,” the ACC representative claimed. Tim Cargal from the Office of the General Assembly spoke in response to a question about “full organic union,” saying the PC(USA) has that relationship with only six denominations. That agreement is designed in part to discourage the transfer of ministers between those union denominations.

After a time to “crystalize ideas” in small groups, where members grappled with the pros of bringing more people into leadership roles connected with PC(USA) churches and the cons of receiving leadership from Christians with potentially different values and approaches to transparency, Shoop returned to the video screen to argue that structural racism informs the issue.

“The bar to dual ordination … embodies the either/or thinking we get caught up in in white systems,” Shoop said. “We can be a both/and church.”

Shoop also pointed out the resource differentials that exist between the PC(USA) and other denominations, and how partnerships are especially important in sharing wealth and resources.

A motion was brought to disapprove the item.

After a vote was taken about stopping discussion — it failed to reach the required two-thirds majority — the conversation continued.

An amendment was brought adding a comment to the motion to disapprove the item, adding language encouraging the church to partner with “historically Black denominations.”

“Instead of saying no on this, we’re saying we want to be in the game,” a commissioner said in approval of the comment. “We want to open the door” to more partnerships with other denominations, especially denominations of color, but without losing more control than Presbyterians are comfortable with.

The subsequent vote to disapprove the overture, with the added comment included, passed unanimously with 28 yes votes.

The day’s last item was “POL-04: On Amending G-2.1002 Regarding Ordaining a Commissioned Ruling Elder as Minister of the Word and Sacrament,” another item referred to GA225 from GA224. Northern New England Presbytery was the overture sponsor.

With Thornburg moderating again, four resource people addressed the committee, including the unflagging ACC, which advised disapproval and conveyed concerns about the way ruling elders and ministers are distinct in the tradition of Presbyterian polity. The ACC in speech and written comment also said there are already ways to make a ruling elder into a teaching elder that are spelled out in the Book of Order.

Saundra Tracy from the Committee on Theological Education urged disapproval, saying that the proposed changes would create two classes of Minister of Word and Sacrament — "those with and those without formal theological education.”

The last resource person to speak on video was the Rev. Nikki Collins from the Presbyterian Mission Agency’s 1001 New Worshipping Communities, who didn’t speak for or against the item. She, like Tracy, described another overture before another Assembly committee (“MC-10: On Establishing a Task Force to Explore the Theology and Practice of Ordination to Ordered Ministry for Ruling Elders”) that could address many of the concerns motivating POL-04.

The Polity Committee had found a groove and returned to the small-group approach from earlier in the afternoon session.

After “crystallizing group thinking,” commissioners and advisory delegates spoke skeptically before the committee microphone about creating a two-tiered system of ministers of Word and Sacrament, and of the idea that being a ruling elder was adequate preparation for pastoring. An opposing voice, speaking in favor of the item, told a personal story about becoming a commissioned ruling elder, and urged that the committee do something to make it easier for people to serve pastoral calls in the PC(USA), even if it didn’t approve the motion currently under consideration.

The committee reprised another afternoon tactic, with commissioners motioning to disapprove the item after adding a comment urging consideration of MC-10, which forms a task force “to study the theology and practice of ordination.”

One commissioner said that MC-10 had passed earlier that day. “This would be an easy and good way for us to handle this thorny problem,” he said.

The vote was taken and passed unanimously, with 30 yes votes.

The Polity Committee turned to worship, and then adjourned. It will reconvene Wednesday morning for its last day of business.