Mourning the loss of a champion for justice and peace 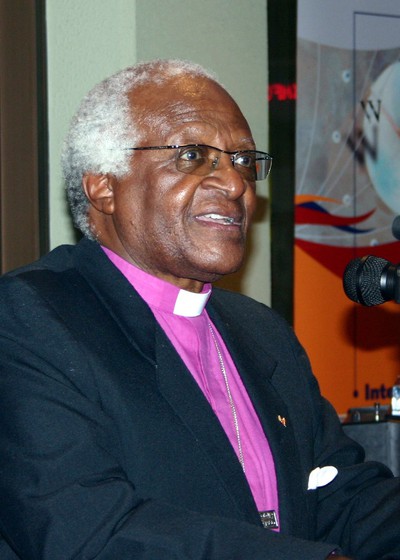 A mighty oak has fallen! The Presbyterian Church (U.S.A.) joins South African partners and people of faith around the world in giving thanks to God for the life, ministry and witness of Desmond Mpilo Tutu, the Anglican Archbishop Emeritus of Cape Town, who died Sunday, December 26 at the age of 90.

Archbishop Tutu played an enormous role in South Africa’s transition from institutionalized white supremacy — known as apartheid —to a democratic state whose constitution protects the rights of all the country’s people.

As the first Black General Secretary of the South African Council of Churches (SACC) from 1978 to 1984, his courageous leadership and outspoken support for the campaign against apartheid, including his endorsement of international economic sanctions, helped to deepen the involvement of the global ecumenical movement in the struggle for human and civil rights in South Africa and the region. Following his election as the Archbishop of Cape Town in 1986, he continued to work for the dignity of all, building alliances with community groups and making St. George’s Cathedral a beacon of hope in the struggle for liberation.

Following South Africa’s transition to democratic rule in 1994, Archbishop Tutu played a pivotal role in shaping the work of South Africa’s Truth and Reconciliation Commission (TRC), created to establish a common record of the gross human rights violations committed during the apartheid era. Tutu believed passionately that South Africa’s future harmony required both justice and reconciliation. Through two years of high-profile public hearings under Tutu’s firm but compassionate leadership, the TRC sought to make restorative, rather than retributive, justice its lodestar.

As South Africa faced new challenges — growing economic inequality, persistent racism, and corruption in the public and private sectors — Archbishop Tutu (now Archbishop Emeritus) often emerged as the nation’s moral compass. He was fiercely independent but implacably committed to economic justice, social equity and inclusion, and protection of the rights and dignity of all, especially marginalized groups. He embraced people living with HIV and AIDS, demanding accessible treatment and an end to stigma.  He was an outspoken opponent of sexism, homophobia and transphobia in both church and society.

Renowned for his infectious laugh and self-deprecating humour, Archbishop Tutu’s humility, zeal for peace with justice, and love for “the Rainbow People of God” were reflected in his books and spirituality. His commitment to ecumenism was evident in his years at the SACC and later as President of the All Africa Conference of Churches, while his high-profile friendship with the 14th Dalai Lama illustrated his appreciation of interfaith cooperation. 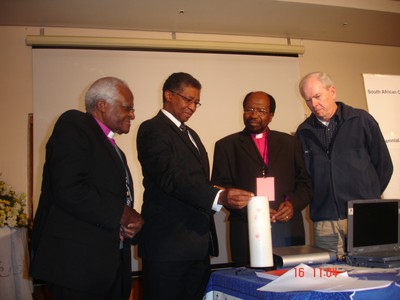 Archbishop Tutu, the late Prof. Russel Botman (then president of the South African Council of Churches), and two other former SACC presidents (Bishop Manas Buthelezi and Bishop Peter Storey) at a celebration of the 40th anniversary of the SACC in July 2007. -Photo by Doug Tilton

Archbishop Tutu, the late Prof. Russel Botman (then president of the South African Council of Churches), and two other former SACC presidents (Bishop Manas Buthelezi and Bishop Peter Storey) at a celebration of the 40th anniversary of the SACC in July 2007. Photo by Doug Tilton -Photo by Doug Tilton

In recent years, the Archbishop became a respected moral voice on a wide range of global issues, including a basic income grant, Palestinian human rights, the Darfur conflict, and climate change. “If you are neutral in situations of injustice, you have chosen the side of the oppressor,” Tutu observed. “If an elephant has its foot on the tail of a mouse and you say that you are neutral, the mouse will not appreciate your neutrality.” Despite the constant stream of international invitations that came his way, he continued for many years to lead early morning eucharist services in Cape Town whenever he could, delighting in joining members of the congregation for breakfast afterwards.

In 2011, following the ratification of the decision of the 219th General Assembly (2010) to permit the ordination of non-celibate LGBTQIA people, Archbishop Tutu wrote an open letter to the PC(USA) expressing support for the church’s action. “For freedom Christ has set us free,” Tutu wrote.  “In Christ we are not bound by old, narrow prejudice, but free to embrace the full humanity of our brothers and sisters in all our glorious differences.”

I was fortunate to visit South Africa as a seminary student during the apartheid in 1979. The tremendous opposition to justice for all people was both overwhelming and seemingly insurmountable. However, Archbishop Tutu and others were focused on freedom. It was even more gratifying to know that the Presbyterian Church (U.S.A.) was on the right side of justice through both active engagement and support for freedom. We mourn the death of this giant freedom fighter who gave his life to reconciling humanity through God’s amazing gift of love..ative power of Christ. The Presbyterian Church (U.S.A.) extends its deepest sympathy and condolences to Archbishop Emeritus Tutu’s family and colleagues and to the many who mourn his passing. Let us honor his memory by redoubling our efforts to ensure that all feel the embrace of inclusion and know the love of God. Let us all be reminded that the struggle for justice is not over.