Day 3 at the Financial Resources Committee 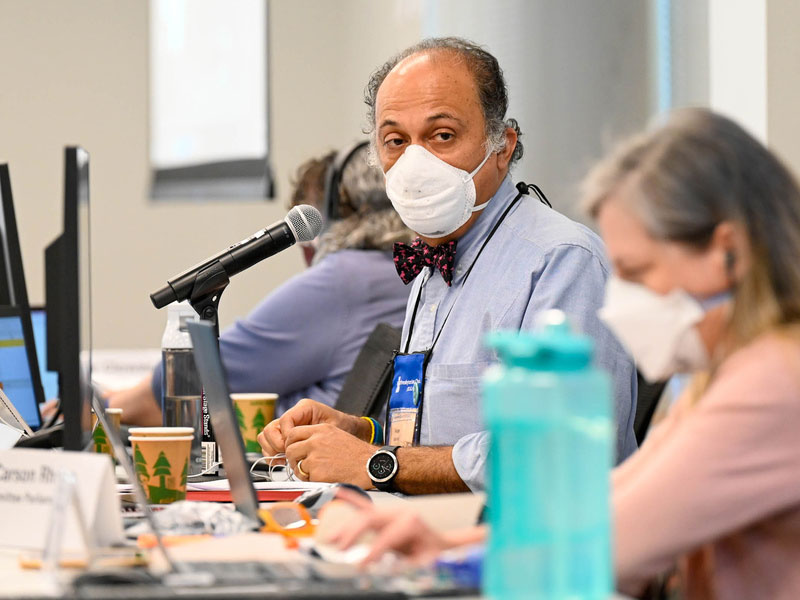 Felipe Martinez, vice moderator of the Financial Resources Committee, leads committee session on June 30, 2022 at the 225th General Assembly of the Presbyterian Church (U.S.A.) at the Presbyterian Center in Louisville, Kentucky. (Photo by Rich Copley)

Felipe Martinez, vice moderator of the Financial Resources Committee, leads committee session on June 30, 2022 at the 225th General Assembly of the Presbyterian Church (U.S.A.) at the Presbyterian Center in Louisville, Kentucky. (Photo by Rich Copley)

Throughout the morning’s work, the Financial Resources Committee Vice Moderator Felipe Martinez lightened the mood and bought time for PC-Biz updates by telling “donut stories” and making donut allusions (see #DonutThursday for an example, or the stack of empty Krispy Kreme boxes in the welcome area of the Presbyterian Center).

It was an apt metaphor. The committee’s last day of in-person discussion and voting was all about ensuring that PC(USA) finances avoid balance sheet holes in coming years.

Day 3 started with continuing work on FIN-10: “Align in Mission, Purpose, and the Use of Resources: Report of the Special Committee on Per-Capita Based Funding and National Church Financial Sustainability,” with the committee taking up Recommendation 2 from the special committee: “Direct the General Assembly Moderator(s) to appoint a Funding Model Development team to develop, recruit, implement, and provide oversight of possible funding model experiments.”

The day before, the committee had amended Recommendation 1, changing a proposed commission to a task force that will work on steps toward unification of the Presbyterian Mission Agency (PMA) and the Office of the General Assembly (OGA).

This morning, per Recommendation 2, an amendment was voted down changing the date when the Funding Model Development team would report back on their final progress and recommendations, from GA227 in 2026 to GA226 in 2024. Valerie Young, co-moderator of the special committee, thanked the committee for looking for ways to hear from the team sooner rather than later but raised concerns about the work being completed by 2024. She thought some sort of status report might be a good alternative for GA226.

Another amendment, adding a comment to look at previous and different funding models across the denomination, also failed.

valerie izumi of OGA and the General Assembly Nominating Committee spoke about the nominations process for members of the proposed Funding Development Model team, including the application process, a factor in any timeline for Recommendation 2. After that, the committee voted to amend the recommendation language so that a progress report would be shared with the Assembly in 2024, and a final report in 2026.

An amendment directing that a member of the Racial Equity Advocacy Committee or Advisory Committee on Social Witness Policy be added to the team also passed.

With committee members now seeing the amended Recommendation 2 on their PC-Biz screens, they voted unanimously with 23 votes to approve it, joining Recommendation 2 to the previously amended and approved Recommendation 1, which had received 17 yes votes and six no votes. The item is now ready for consideration by the full Assembly next week.

After that, the committee received presentations on three items of business it will not vote on until the last day of the Assembly, July 9: FIN-14, FIN-13 and FIN-12.

Ian Hall from the PC(USA) A Corp introduced FIN-14: “Approval of the 2023-2024 Budget—Unified Presentation,” a joint presentation of the budget, but not a joint budget. There are intersections of the ASG, PMA and OGA budgets, Hall explained, but each is individually managed by each agency.

Throughout the video portion of the presentation, speakers from the three involved agencies and entities (PMA, OGA and A Corp) discussed their own balance sheets and programming but also touched on the other agencies’. 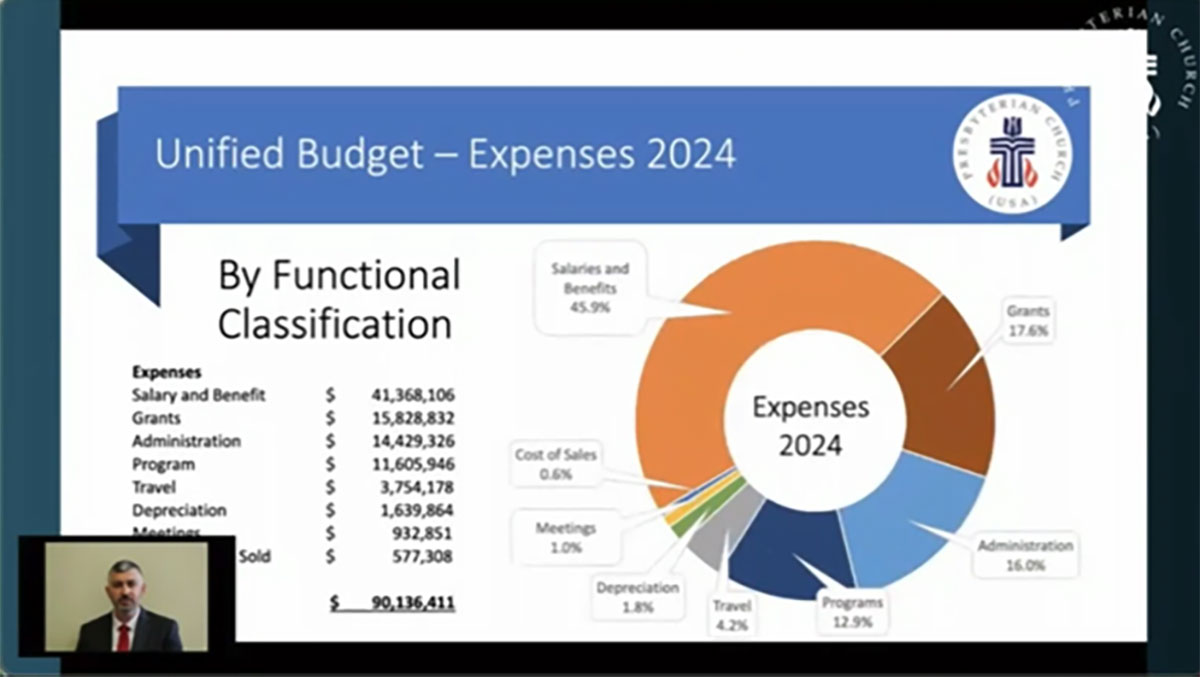 One commissioner asked for last year’s budget numbers, to compare with this year’s. During the next presentation, [FIN-13]: “Approval of the Per Capita Apportionment Rate,” a similar request was made by a different commissioner. Hall said the budget team would make sure to provide those past-year numbers in the future.

Other commissioners asked about church finances before and during the pandemic. Hall said, “Historically the PC(USA) has been very conservative when it comes to income projections and liberal when it comes to expense projections,” which allowed the church to weather the financial storms of Covid. That approach should continue to provide budgetary flexibility beyond 2022.

For FIN-13, Kerry Rice, deputy stated clerk in OGA, introduced per capita as a funding practice that brings the different parts of the church together — “in mutual support and ministry” — and makes possible shared endeavors, including the General Assembly. He discussed some different ways presbyteries collect and pass on per capita to the Assembly, and how the pandemic caused Assembly-related expenses to drop, in part because of the online format of GA224, helping with a previously forecast budget shortfall.

This year and next year, a 7% increase is being requested for per capita. Per FIN-14, “The Committee on the Office of the General Assembly and the Presbyterian Mission Agency recommend the 225th General Assembly (2022) adopt the following per capita apportionment rate: $9.61 for 2023, and $10.28 for 2024.”

Kris Valerius from OGA, who is also serving the Financial Resources Committee as transcriptionist, talked about the way membership is accessed at congregations, which connects to the per capita remittances made by presbyteries.

The Rev. Lynn Hargrove from the Committee on the Office of the General Assembly pointed out how little the per capita rate had changed since 2013, and how over the past four years it has been nearly flat. Vice Moderator Martinez reminded committee members about a PDF at the bottom of FIN-13 showing per capita changes in the past 10 years.

Rice answered a question about increases to per capita that would be caused by other committees, saying that this was the reason the Financial Resources Committee will be the last committee to meet, so that any additional budget changes can be factored into the final per capita request. Those adjustments would show up in [FIN-12]: “Approval of the Per Capita Budget,” which the Financial Resources Committee will also vote on during the last day of the Assembly. The recommended budgets as of now are listed as $14,954,091 for 2023 and $16,193,992 for 2024.

Financial implications that could impact the per capita rate request and per capita budget can be tracked during plenary in PC-Biz. That information is based on approved motions from the Financial Resources Committee and the other 16 committees that have been meeting at the Presbyterian Center in Louisville.