Co-Moderators of the General Assembly 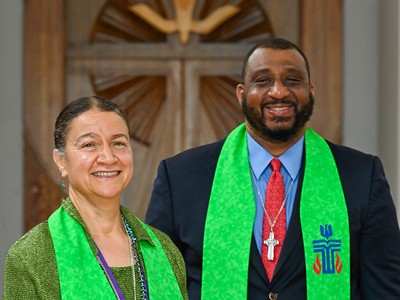 Grace and peace to you in the strong and sufficient name of Jesus the Christ.

We are saddened and outraged by the racist slaughter of 10 Black men and women that took place at a supermarket in Buffalo, New York, this past Saturday. We continue to reap the bitter harvest of the toxic seeds of the congenital defects of the founding of our nation: the genocide of Indigenous people and theft of their land and the enslavement of Africans. Our pain was exacerbated the next day by the traumatic shooting attack on Taiwanese elders, members at Geneva Presbyterian Church in Laguna Woods, California, that killed one person and left five others seriously injured.

These acts of violence, fueled by hatred, are now happening with such ferocity and frequency that we no longer can attribute them to “a few bad apples” or “mental illness” or whatever other excuse has been given in the past to diminish and deny the racist character of these assaults. It is way past time to have a sustained and systematic response to this deep spiritual sickness and malformation that is giving rise to these heinous acts of terror, a response that is at the heart of the Matthew 25 vision to dismantle structural racism.

The Confession of Belhar calls the church to “reject any ideology which would legitimate forms of injustice and any doctrine which is unwilling to resist such an ideology in the name of the Gospel.” The Great Replacement Theory, which is fueling this racist violence, must be opposed by the church with the same fervor and intensity with which Nazism was opposed by the Confessing Church of Germany. To remain silent in the face of these atrocities is an act of complicity and a betrayal of the Gospel.

In Service and Solidarity,