Office of the General Assembly 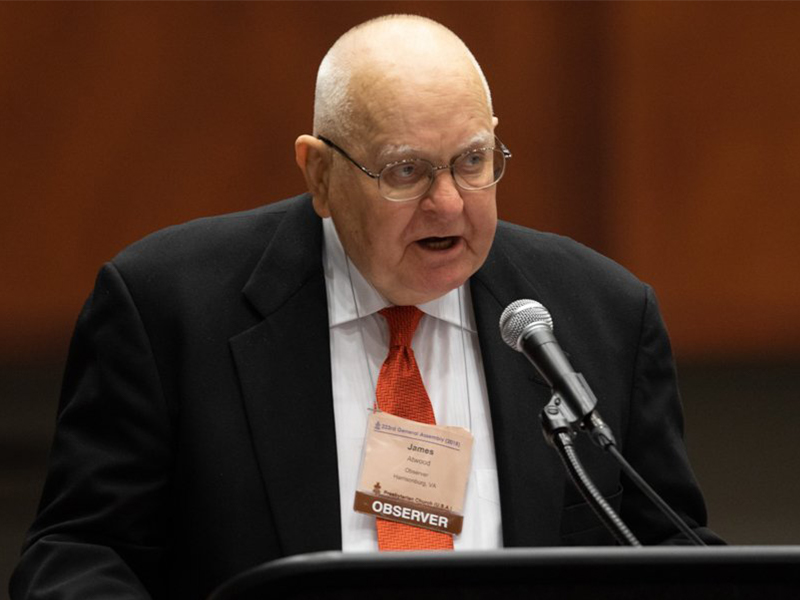 The Presbyterian Church (U.S.A.) is mourning the loss of retired pastor, author, and gun violence prevention advocate the Reverend Jim Atwood, who died on Friday as a result of the COVID-19 virus.

Atwood, who had also served as a missionary in Japan, returned to the U.S. as a pastor and retired in 1999 from the Trinity Presbyterian Church in Arlington, Virginia. An avid hunter, Atwood had said he became interested in the issue of gun violence after a charter member of one of his churches had been shot and killed during a robbery. He then moved to join the board of the Coalition to Stop Gun Violence (CSGV).

The Reverend Dr. J. Herbert Nelson, II, Stated Clerk of the General Assembly of the PC(USA), says Atwood’s passing is a personal loss.

“Jim was a great friend and person who taught me quite a bit about gun violence. We stood together in rallies and churches and spoke at different occasions when I worked in the PC(USA) Office of Public Witness in Washington,” Nelson said. “I’m going to miss him as a brother and person whom I highly respected. He was faithful to Jesus Christ during his service and was faithful as a friend and person who gave himself to the fullest to those he engaged. He will be missed.”

Atwood had said his group never tried or said that they are “out to take people’s guns,” adding that they were in this as a faith community to protect and save human lives.

“It always gets my dander up when people say the church ought to stay out of a political issue and as a spiritual community, we should stay out of that,” he said in an interview with Nelson two years ago. “Over 150 years ago, that’s how we treated slavery — that it was not a religious or biblical concern, it was an economic and political issue, and we bought into that.”

Last week, Atwood was honored by the Stated Clerk with the PC(USA) Crystal Teardrop Award for his work in gun violence prevention. The award was initially to be presented to him at the 224th General Assembly (2020) in Baltimore. However, the pandemic forced the national church to move to an online assembly. The award was sent to the Atwood family.

Nelson says he had spoken with Atwood a few days before his passing and described him as in good spirits.

“Jim was a big voice trying to eradicate gun violence in the streets. He was one who never shied away from letting you know he was a hunter, but that you did not need an AK-47 in order to shoot a deer,” Nelson said. “He had a way of speaking and letting people know he was a down-home kind of guy, yet could rise to the level of astuteness on any stage to be able to share some of the work he was passionate about.”

Atwood was the author of several books including: "Collateral Damage," "Gundamentalism and Where It Is Taking America," and "America and Its Guns: A Theological Exposé."

Atwood was also a member of the National Committee of the Presbyterian Peace Fellowship and Heeding God’s Call of Greater Washington.

The family says they will post about future plans for a celebration of Atwood’s life.